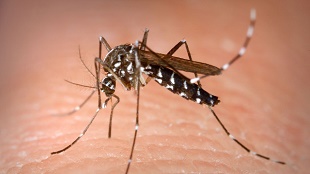 CDC, JAMES GATHANYModels that can calculate the spread of chikungunya virus in the Caribbean and North, Central, and South Americas are being sought in a contest announced by the US Defense Advanced Research Projects Agency (DARPA) last week (August 15).

This is the first health-related challenge announced by DARPA’s new Biological Technologies Office division; awards of $150,000 and $100,000 have been announced for the top two solvers, with four honorable mention awards of $50,000 each.

DARPA Program Manager Matthew Hepburn told ScienceInsider that his agency seeks technologies that can be used to make decisions if an outbreak occurs. “It’s one thing to know what’s happening on the ground currently,” he said. “But really to design your response decisions, you need to know what’s going to happen next.”

Accurately predicting the next chikungunya outbreak could help prevent the spread of the vector-borne infection. Although rarely fatal, the debilitating fever...

The DARPA Challenge, which requires multiple rounds of submissions, is open to anyone over 18. Initial submissions are due September 1, and a final submission with methodological details is due in February 2015.

“Chikungunya is already here, so teams are going to have to work at the speed of an epidemic to build their models,” Hepburn said in a press release. “But we believe this effort could lead to the creation of tools that work even faster than the speed of an epidemic, giving us the opportunity to act effectively before an infectious disease actually arrives and spreads.”