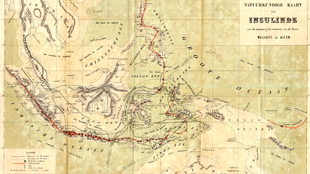 Historian John van Wyhe of the National University of Singapore has released a new book that claims to resolve the debate over whether Charles Darwin cribbed his theory of evolution through natural selection from Alfred Wallace. Most believe that the two scientists discovered the theory of evolution independently: Darwin during his trip to the Galapagos Islands and Wallace during his 8-year trip to the Malay Archipelago. However, uncertainty about exactly when Wallace mailed a draft of his essay outlining his discovery to Darwin led to speculation that Darwin plagiarized his work from Wallace.

Van Wyhe used historical documents to trace the route of Wallace’s letter and demonstrated that Darwin came up with his theory before receiving Wallace’s letter, confirming that the men developed their theories independently. Van Wyhe documents his research in his new book, Dispelling the Darkness: Voyage in...

Van Wyhe’s book, also chronicles other aspects of Wallace’s journey to Malaysia, including the fact that his eureka moment in his thinking of evolution came during a malarial fever on the island of Ternate near New Guinea.

“Although the theory of evolution story has been told thousands of times in books and documentaries, several long-standing mysteries and many myths and legends have distorted our picture of the most important revolution in the history of science,” said van Wyhe in a statement. “This book aims to shed light on Wallace’s less well-known voyage and reveal the true story of how evolution was unveiled to the world.”