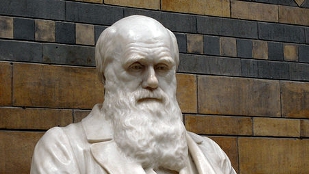 A number of cities around the world have begun to trumpet the accomplishments of Charles Darwin this month.  Many started yesterday (February 12), Darwin’s birthday and the official “Darwin Day,” while others will start and continue their programmed celebrations throughout the month.  (You can read about all of the various celebrations at darwinday.org.)

To commemorate the day, The American Museum of Natural History (AMNH) in New York has announced that it is releasing the first phase of a catalog of Darwin’s manuscripts containing some 45,000 documents.  Other efforts to immortalize Darwin’s work are ongoing, including papers made publicly available through the Biodiversity Heritage Library.  The AMNH papers trace the scientist’s ideas as they developed into his theory of evolution and natural selection and include hand-written documents from his expeditions and field notes, some of which...

“Darwin's work, particularly his theory of evolution, is foundational for all of biology including work underway at the Museum today,” said Michael Novacek, senior vice president and provost for science at AMNH in a statement.