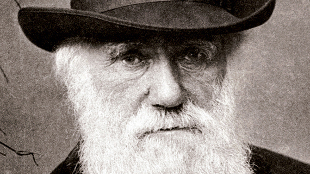 New evidence is casting doubt on the popular belief that Charles Darwin may have borrowed some ideas from naturalist Alfred Russel Wallace when developing his theory of evolution by natural selection. The story goes that in 1858 Wallace, studying the biogeography of the Malay Archipelago in Southeast Asia, wrote a letter to Darwin outlining his thoughts on how nature might select the most advantageous traits among living things in such a way that species could change forms and functions gradually over long periods of time. Darwin was to deliver Wallace's letter to renowned geologist Charles Lyell immediately, but instead lied about the date he received the correspondence, held onto it for two weeks, and cribbed from it to add to his own ideas on evolution.

But historians of science at the National University of Singapore traced the journey of Wallace's letter...

Though most historians of science don't believe that Darwin plagiarized Wallace in any way, the popular fraud theory has lived on for many years. And according to at least one such scholar, this new evidence will do little to dispel it. "For a variety of different motives, there will, I fear, always be people who see it as their mission to attack Darwin's character as a way of undermining his remarkable scientific achievements," University of Pittsburgh historian of science James Lennox told Nature.