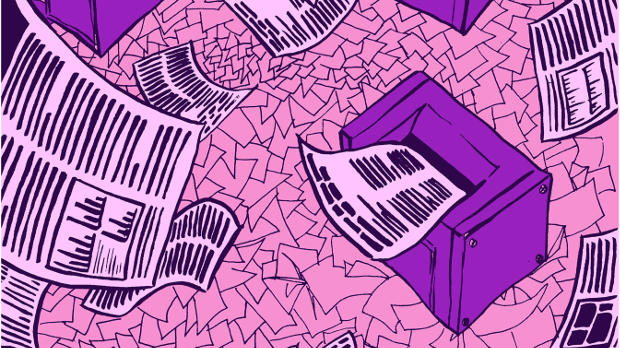 CLAUDIA STOCKER, VIVIDBIOLOGY.COM/ELIFE, S. SEIBERT ET AL. As journals multiply and the sheer volume of published scientific papers increases exponentially, biomedical scientists become less able to stay on top of the quality work being done in their fields, according to a new study. Reporting their findings in eLife last week (September 14), researchers from the University of Glasgow in Scotland suggested that biomedical scientists in the U.S. are so overwhelmed by mountains of new studies coming out every day that the so-called overflow may be eroding science itself. “There’s a flood, there’s a deluge of published and unpublished papers,” coauthor Sabina Siebert, a business professor, told Inside Higher Ed. And that flood may drown out good science and promising researchers in a rising tide of mediocre work.

Siebert and her colleagues conducted anonymous interviews with US researchers—seven from government agencies and 13 from universities—asking them to speak candidly...

This, Siebert suggested, may be because the scientific literature is outpacing the peer review process’s ability to effectively filter all the data. “It has only so much capacity,” she told Inside Higher Ed.

According to the authors, the outlook for life science is bleak, unless decisive action is taken soon. “Overflow and its consequences are clearly with us to stay,” they wrote in eLife. “It is hard to anticipate which solutions would best regain the trust of the field. But it must be considered and addressed, and soon, or trust will continue to drain out of the scientific enterprise.”