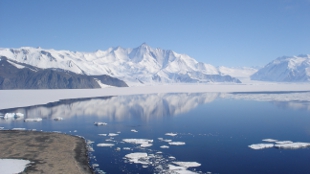 Mt Herschel, a mountain in the vicinity of the crashWIKIMEDIA, ANDREW MANDEMAKERThree Canadian crew members of an Antarctic research plane are presumed dead after their aircraft crashed into the side of a mountain in the rugged interior of the southern-most continent.

The plane, operating under the auspices of the Italy’s Antarctic research program, was on its way from the U.S.-run Amundsen-Scott research station at the South Pole to Italy’s Zucchelli station on the coast when it crashed last Wednesday (January 23).

Late last week two New Zealand-operated helicopters located and surveyed the wreckage, and searchers concluded that the crash was not likely survivable for the two pilots and one mechanic aboard. There were no researchers on the flight, and the reasons for the crash are still unknown. “Our thoughts are now with the families of the crewmen,” Tracy Brickles, who was coordinating the search effort for the Rescue...

A joint U.S.-New Zealand team is readying to mount an expedition to recover the bodies, according to the RCCNZ.