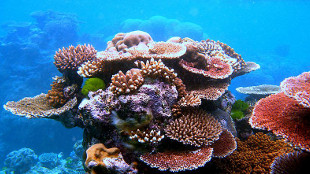 Wikimedia, Toby HudsonManeuvering a robot in the dark depths of the Pacific Ocean, researchers found a community of corals on the north side of the Great Barrier Reef that are submerged some 125 meters below the water’s surface—at four times the depth of reefs easily reachable by scuba divers and nearly twice the previously recorded depth of coral in the Great Barrier Reef. The record finding, announced in a press release by Catlin Seaview Survey last week (December 28), hints at remaining unknowns about coral reef ecology.

“When we began our survey, we were amazed to see significant coral communities at depths of around 60 meters. However, it is truly mind-blowing to see reef coral at more than twice that depth,” lead researcher Pim Bongaerts of the Global Change Institute at the University of Queensland said in a press release. “[T]hese discoveries show just how little we really know...

The expedition, which found small communities of Leptoseris corals growing on rocks 125 meters down and the common Staghorn coral (Acropora) at a record 73 meters deep, is part of a global project to survey reefs threatened by climate change, fisheries, ocean acidification, and pollution. The team has searched deep depths before, but has found that coral populations usually give way to sponges and other creatures that aren’t dependent on light.

“The discovery shows that there are coral communities on the Great Barrier Reef existing at considerably greater depths than we could ever have imagined,” Bongaerts said in the release. The next step, she added, is to understand how these corals survive at such extreme depths.

Researchers have previously found light-dependent corals as far down as 150 meters in Puerto Rico. And the coral Lophelia pertusa—which doesn’t require light—has been found growing 799 meters below the surface of the Gulf of Mexico.