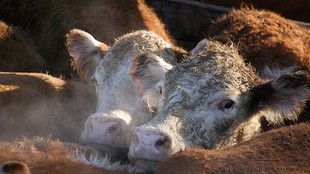 After a largely negative review in 2010, the National Bio- and Agro-Defense Facility is back on the right track, though more progress is needed before it can officially open its doors, according to an independent National Academy of Sciences (NAS) review panel.

The facility, which would be the highest biosafety level lab in the country, has drawn criticism for its risk of releasing dangerous pathogens into the surrounding cattle-dense region of Manhattan, Kansas. Of particular concern is the release of foot and mouth disease, which can decimate cattle and other cloven-footed animals. The US Department of Homeland Security released an assessment in 2010 that, when analyzed by an independent review panel, put the risk of releasing infectious diseases like foot and mouth at 70 percent over the facility’s planned 50-year lifespan. The high risk and methodological flaws presented in the DHS assessment prompted Congress to...

In response to the damning review of the 2010 assessment, facility leaders improved plans for the building and changed their assessment methods to more closely match industry standards. Now, a second assessment released last week (June 15) estimates the risk of infectious disease release at only 0.11 percent over the same time span. The NAS panel concluded in its review that the updated estimate is based on “questionable and inappropriate assumptions,” however, such as poor calculations into the possibility of release by human or operational error. “A valid scientific and technical risk analysis is quite possible for this facility,” Greg Baecher, chair of the review panel told Nature. ”It’s just that the current report hasn’t gotten there yet.”

There are also questions as to whether the facility is necessary at all, and those questions will be answered by a separate committee due to report its recommendations later this month. The National Bio- and Agro-Defense Facility was proposed to replace the aging Plum Island Animal Disease Center located off Long Island, which is one level lower in biosafety designation, and is currently the only US facility capable of studying dangerous infectious and foreign diseases in large animals.