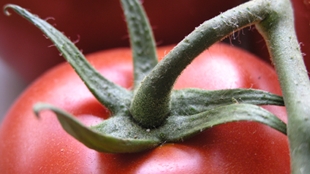 Researchers have compiled a profile of flavor and aromatic compounds that work together to make tomatoes tasty, reported Wired Science. As part of the ongoing effort to help breed supermarket-sturdy tomatoes with appealing flavor, scientists correlated consumer preference with expression patterns of compounds that contribute to tomato flavor and sweetness, and reported their findings in a study published online last week (May 24) in Current Biology.

“With something like a banana, you can identify one volatile compound that you smell and say, ‘Aha! It’s a banana!’ With a tomato, it’s not that simple,” co-author and plant molecular biologist Harry Klee, of the University of Florida, told Wired. “You can detect 400 volatile compounds in a tomato. People have speculated that maybe 20 are really important, and they need to be orchestrated properly.”

Unfortunately, researchers have yet to match tomato genotype with likable phenotype. Future work will aim to uncover the genetic basis for positive tomato attributes, to allow tomato growers to breed delicious fruit that are also disease-resistant and transport well.

Klee’s group is meanwhile doing its own experimenting in home gardens. “We’ve taken some of the heirlooms and crossed them with some of the more modern, highly disease-resistant varieties,” he told Wired. “We’re testing them in the field now... They taste great.”