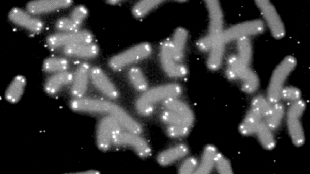 The telomeres of human chromosomes fluoresce in this micrographWIKIMEDIA, NASAPeople suffering from depression show signs of advanced cellular aging, such as significantly shorter telomeres, according to a new study. Researchers from the VU University Medical Centre in Amsterdam, along with US collaborators, found that study participants who were depressed or who had experienced bouts of severe depression in the past had shorter telomeres than healthy volunteers, and the effect held true even after lifestyle differences—such as heavy drinking and smoking—were corrected for. “Psychological distress, as experienced by depressed persons, has a large, detrimental impact on the ‘wear and tear’ of a person’s body, resulting in accelerated biological aging,” lead study author Josine Verhoeven told LiveScience.

Verhoven and her colleagues, who published their findings in Molecular Psychiatry today (November 12), took blood samples from more than 2,000 volunteers: one-third of whom had been suffering from major depression at...

According to the researchers, the results may help to elucidate a molecular link between major depressive disorder and increased onset risk of heart disease, diabetes, obesity, and cancer—trends that have been established by previous research.