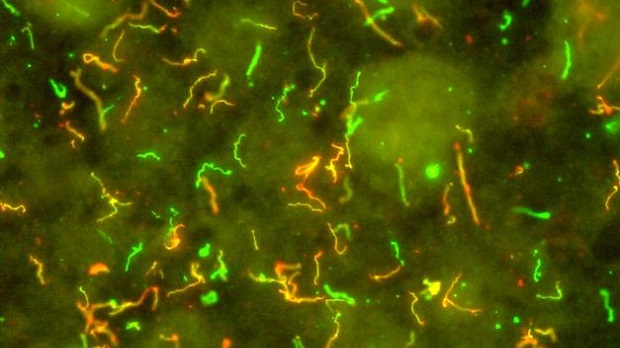 Borrelia burgdorferiFLICKR, NIAIDA distinctive pattern of gene transcription in the white blood cells of people infected with Borrelia burgdorferi, the causative agent of Lyme disease, could serve as the basis for a diagnostic test that flags the infection earlier than current methods, according to a study published today (February 12) in mBio.

“Improved diagnostics are urgently needed for Lyme disease,” study coauthor Charles Chiu of the University of California, San Francisco, said in a press release. “The tick that transmits Lyme also harbors many other pathogens, and early diagnosis is critical in guiding appropriate treatment and preventing later complications of the illness.”

Chiu and his colleagues used RNA-seq to examine the blood samples of 29 patients before and after a three-week course of antibiotics, finding that distinctive Lyme-associated gene signatures persisted for at least that long. Retesting the patients’ blood six months later, the team...

Meanwhile, Aucott and other colleagues found that they could detect membrane proteins from B. burgdorferi as another possible diagnostic method. “Our hypothesis was that Lyme bacteria shed vesicle-like particles—or fragments—derived from the cell wall of the bacteria circulating in the serum of individuals. These particles would contain membrane proteins that can be detected to provide a unique indicator of infection,” coauthor Larik Turko of the National Institute of Standards and Technology said in a press release. “From many candidates, we chose one [ospA] that is both easily distinguished from human serum proteins and an unambiguous indicator of the bacteria.”

In one patient with undiagnosed Lyme disease, the transcriptome-based technique detected the bacterium three weeks before the standard test, which detects antibodies that accumulate following infection; in two other patients, the new method detected the infection at the same time. The team published its results yesterday (February 11) in Analytical Chemistry.

“The complexity of Lyme disease, combined with lack of biomarkers to measure infection, has slowed progress,” Aucott said in the press release. “Now, thanks to recent advances in technology, the tiniest concentration of blood molecules can now be detected, molecules that were previously ‘invisible’ to scientists.”