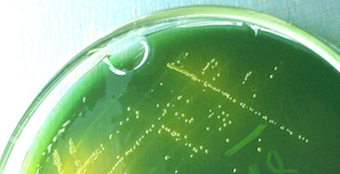 Vibrio cholerae, congener to V. natriegensWIKIMEDIA, MICRORAO Escherichia coli has served science well. But it takes 20 minutes to reproduce. So some scientists have suggested an alternative: the salt marsh-dwelling bacterium Vibrio natriegens, which—under optimal conditions—reproduces in half that time.

Harvard geneticists George Church and Henry Lee and colleagues have developed genetic tools to make the nonpathogenic V. natriegens into a model system. The team reported its results earlier this month (June 12) a bioRxiv preprint. The researchers sequenced and annotated the V. natriegens genome and honed methods to disrupt the bacterium’s genes with transposons and edit its DNA using CRISPR.

“We want to develop tools that would make it a drop in, turn-key alternative for E. coli,” Lee told Science.

Biologist Adam Arkin of the University of California, Berkeley, who was not involved in the work, remains skeptical that V. natriegens can replace...

It also remains unclear how much of a difference a faster model organism will make, since cultures still easily replace themselves in a day, biologist Richard Lenski of Michigan State University who was not involved in the work told Science. “But time will tell, and it will certainly be interesting to learn more about this organism.”