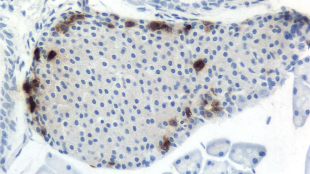 WIKIMEDIA, BCARVER1Update (December 29, 2016): This study has been retracted.

A study published in Cell last year offered evidence that a hormone called betatrophin, or Angiopoietin-like protein 8 (ANGPTL8), could ramp up pancreatic β cell proliferation in a mouse model of insulin resistance. The results made quite a splash; the study’s authors—led by Doug Melton at Harvard University—even wrote that betatrophin treatment “could augment or replace insulin injections by increasing the number of endogenous insulin-producing cells in diabetics.”

But a follow-up study by an independent group of researchers found that the hormone is not required for β cell function or growth. “The lack of expansion of the beta cell area could theoretically be due to simultaneous increases in replication and apoptosis frequencies. However, even if this were the case, it would not change our observation that Angptl8 overexpression did not increase beta cell area, contrary to what was reported...

At his blog, Paul Knoepfler of the University of California, Davis, expressed his disappointment at “this unfortunate turn of events,” given how promising the hormone appeared to be. Melton’s group redid its experiments to see what might have caused the discrepancy, finding the same result as Gusarova’s team. The problem appears to have been variability in how the mice responded to betatrophin, Melton and his colleagues wrote in a response article accompanying Gusarova’s study. “[S]ome mice respond strongly to ANGPTL8/betatrophin expression but many do not,” they wrote.

“It’s now unclear what the fate of the 2013 Betatrophin paper will be moving forward given that its central argument is incorrect and even the naming of the molecule ‘Betatrophin’ is indeed perhaps not appropriate [anymore],” noted Knoepfler.