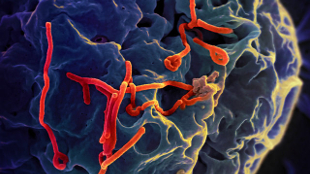 FLICKR, NIAIDAs West Africa has battled Ebola over the last year, clinicians have been restricted to time-consuming, PCR-based assays to diagnose infection. The test required an entire vial of a patient’s blood, and the sample then had to be transported for analysis to a laboratory facility, which in Sierra Leone, Guinea, or Liberia can take hours or even days. But a new test stands to change the status quo: ReEBOV uses only a fingerprick of blood and can deliver results in just 15 minutes.

Based on lab evaluations of the test, the World Health Organization (WHO) granted ReEBOV Emergency Use Authorization in February. At that point, researchers initiated a study to compare ReEBOV to the traditional PCR-based approach, using both tests to assess 106 suspected Ebola patients at two clinics in Sierra Leone as well as 284 previously collected blood samples. Last week (June 25), the group reported in...

“This is an important proof-of-principle that the test can really be used in a field setting,” infectious disease doctor Charles Chiu of the University of California, San Francisco, who was not involved in the study told Science.

ReEBOV is a paper-based test that detects Ebola antigens. In addition to being easy to use in field or clinical settings, the test is also relatively cheap. Compared with an estimated cost of $100 for a PCR-based diagnosis, ReEBOV runs just $15 per test.

“We were surprised by the performance,” coauthor Nira Pollock, an infectious disease doctor at Boston Children’s Hospital, told Science. “It was more sensitive than I expected for a rapid antigen diagnostic test.”

“This test can be done in very austere environments, even off the back of a truck; it doesn’t require electricity or a sophisticated lab or an experienced technician,” added Robert Garry, a virologist at Tulane University in New Orleans, Louisiana. “We need to be better prepared for the next Ebola outbreak, and I think with this test we will be.”