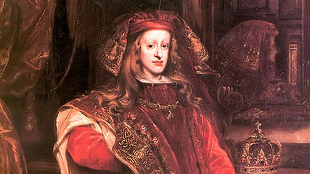 Charles II of Spain (1661-1700), who was infertileSCHLOSS ROHRAUThe Habsburg royal family of Spain, which favored inbred marriages to keep titles in the family and forge alliances, may have evolved from 1450–1800 to blunt the worst effects of inbreeding, according to a study published this month in Heredity. But some geneticists are not convinced, reported Nature.

Evolutionary theory predicts that over time, there will be a purging of the harmful mutations that result from inbreeding. But while the effect has been observed in animals and plants, there is little evidence for this phenomenon in human populations. Researchers from the University of Santiago de Compostela in Spain decided to look for that evidence by analyzing 350 years of genealogical records of the Spanish Hapsburgs, a family with a long history of inbreeding.

Inbreeding increases the probability that offspring will inherit two copies of a recessive disease-causing mutation,...

Sure enough, their analysis of deaths in the written records of the Habsburg royal family revealed significantly fewer early deaths in children between 1600 and 1800 than between 1450 and 1600.

The number of infant deaths went up over the same period, however, which the authors said might be because deaths in infancy and early childhood were caused by different mutations—so the infants might have died as a result of mutations that only cause disease some of the time, and were thus purged more slowly than those that almost always cause disease and might have caused the deaths in early childhood.

But Princeton University geneticist Leonid Kruglyak told Nature that the observed changes in mortality may not be due to natural selection, and are more likely to be a statistical fluke caused by the small size of the sample.