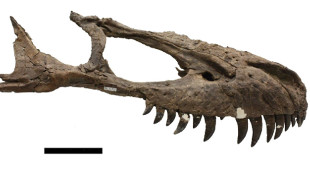 The 75-million-year-old skull of a juvenile Daspletosaurus—a smaller cousin of Tyrannosaurus rex—found in an Alberta quarry in 1994 carries tooth marks of fellow tyrannosaurs that were inflicted both before and after the young animal’s death, according to a crowdfunded study published this week (April 9) in PeerJ.

Researchers from Queen Mary University of London and Alberta’s Royal Tyrrell Museum, where the skull is housed, examined the 21-inch-long skull and found multiple bite marks that matched the shape of tyrannosaur teeth, which could reach up to 4 inches in length. One bite even punctured the back of the animal’s skull. The dinosaur mostly likely did not die from these injuries, however, since the bone around the puncture marks showed evidence of healing.

“This animal had something of a hard life even though it wasn’t an adult,” study coauthor David Hone of Queen...

Additional tyrannosaur-sized bites along the jaw did not heal, suggesting that they were likely inflicted by scavengers after the 10-year-old dinosaur’s death. The scavengers could have been either fellow Daspletosaurus (Greek for “frightful lizard”) or another variety of tyrannosaur, Gorgosaurus. Tyrannosaurus rex did not arrive in Canada until 10 million years later.