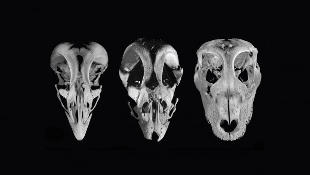 The skull of a normal chicken embryo has a beak (left), but when certain gene expression pathways are blocked (middle) it develops a snout that resembles that of a modern-day alligator (right).IMAGE: BHART-ANJAN BHULLARScientists have created chicken embryos with faces that hearken back to their dinosaur roots, according to research published today (May 12) in Evolution. Researchers at Harvard, Yale, and elsewhere inhibited gene expression pathways in two domains within developing chicken embryos: the frontonasal ectodermal zone (FEZ) and the midfacial Wnt-responsive region. Doing so yielded embryonic chicks with altered facial morphology that looked less like that of a beaked bird and more like the snout of a crocodile or a long-snouted dinosaur. “We’re trying to explain evolution through developmental studies,” Harvard evolutionary developmental biologist and coauthor Arhat Abzhanov told Science.

The interrupted gene expression pathways are involved in transforming birds’ premaxillae—facial bones that for part...

But the altered chick embryos didn’t look exactly like dinosaurs, according to Bhullar. “Looking at these animals externally, you would still think it’s a beak. But if you saw the skeleton, you’d just be very confused,” he told Nature. “I would not say we gave birds snouts.”

But at least one developmental biologist wasn’t as excited about the newly published research. The University of California, San Francisco’s Ralph Marcucio told The New York Times the work held promise, but he wasn’t convinced that the authors had zeroed in on the evolutionary key to beak formation. Because Abzhanov, Bhullar, and their colleagues used chemicals with potentially toxic side effects to block the expression pathways in the chicks, the resultant morphology could have simply been due to damaged tissue, said Marcucio. And at least one of the proteins targeted in the experiment disappears long before premaxillae begin to develop, making it unlikely that it has a direct role in beak formation. “It’s a simple kind of thing, but when you look at the actual pieces of data, it tends to fall apart,” Marcucio said. “It takes away from the complexity that’s the reality.”

Bhullar told Nature his team plans to investigate the expansion of the mammalian skull and the unique structure of crocodiles’ lower limbs by taking similar reverse-evolution approaches. “I think it will open as big a window as you could possibly get into the deep past without having a time machine,” he said.