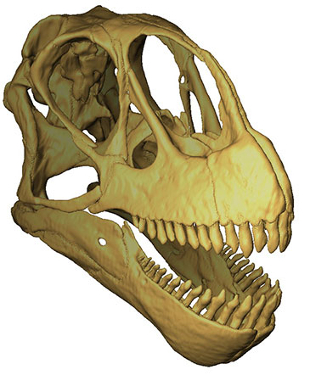 The completed skull model of the Late Jurassic North American sauropod dinosaur, CamarasaurusDAVID BUTTONSpecialized feeding habits may account for the diversity of giant, herbivorous sauropod dinosaurs that populated North America during the Late Jurassic, about 150 million years ago. To compare the munching abilities of two sauropod genera, Camarasaurus and Diplodocus, researchers created three-dimensional simulations of their skulls and jaw muscles. The results, published yesterday (October 8) in the Proceedings of the Royal Society B, show that Camarasaurus had mightier jaws and likely fed on woody plants, while the narrower jaws of Diplodocus may have helped it chomp on ferns and horsetails.

To analyze the sauropods’ skulls, scientists at the University of Bristol and the Natural History Museum in London used computerized tomography (CT) scans of the animals’ fossils. The scans yielded 3-D reconstructions of the skulls, with marks on the bones indicating the anatomy of...

“Our results show that although neither could chew, the skulls of both dinosaurs were sophisticated cropping tools,” study coauthor David Button of the University of Bristol said in a press release. “Camarasaurus had a robust skull and strong bite, which would have allowed it to feed on tough leaves and branches. Meanwhile, the weaker bite and more delicate skull of Diplodocus would have restricted it to softer foods like ferns.”

This work helps to explain how a semiarid environment could have supported 10 genera of sauropods—“megaherbivores” with considerable energy requirements. “In modern animal communities differences in diet such as this . . . allow multiple similar species to coexist by reducing competition for food,” coauthor Emily Rayfield said in the press release. “Although dietary niche partitioning has been suspected . . . based on [sauropods’] structural features and patterns of tooth-wear, this is the first study to provide strong, numerical, biomechanical evidence for its presence in this fossil community.”