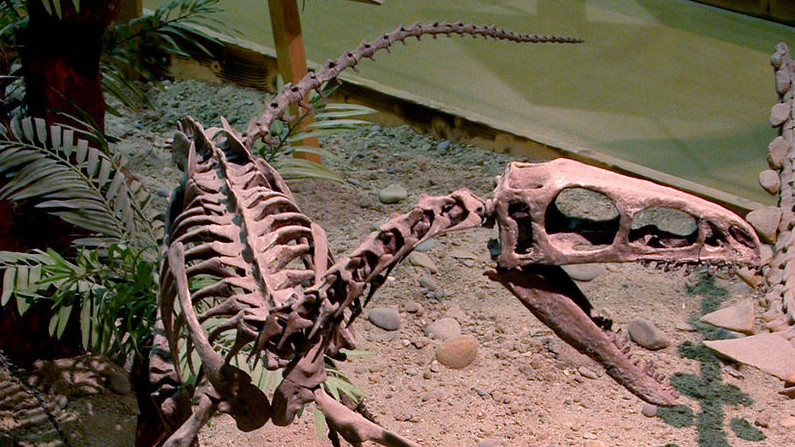 Reconstructed coelurosaur skeletonWIKIMEDIA, GREG GOEBELThe feathered tail of a 99-million-year-old dinosaur, complete with eight vertebral segments as well as evidence of soft tissue and blood, has been found in Cretaceous amber, according to a December 8 study in Current Biology. The 1.4-inch segment likely came from a coelurosaur about the size of a sparrow, the authors wrote in their paper.

“We can tell that this specimen came from a theropod dinosaur because the tail is flexible and the vertebrae articulate with each other, instead of being fused together to form a solid rod,” coauthor Ryan McKellar of the Royal Sakatchewan Museum in Canada told The Washington Post.

Scientists have long suspected that modern birds evolved from therapod dinosaurs, and prior fossil finds have suggested that therapods likely had bird-like feathers. Individual feathers have even been found in amber, but this is the first study to firmly link...

After examining the tail remnant—which was recovered from an amber market in Myanmar in 2015—with the help of a microscope, X-ray scanner, and CT scanner,  the authors found eight vertebrae, a series of velcro-like hooks called barbules (also found in modern birds), and evidence of feather pigments. “The open, flexible structure of the feathers is more similar to modern ornamental feathers than to flight feathers, which have well-defined central shafts, branches, sub-branches, and hooks that latch the structure together,” National Geographic reported.