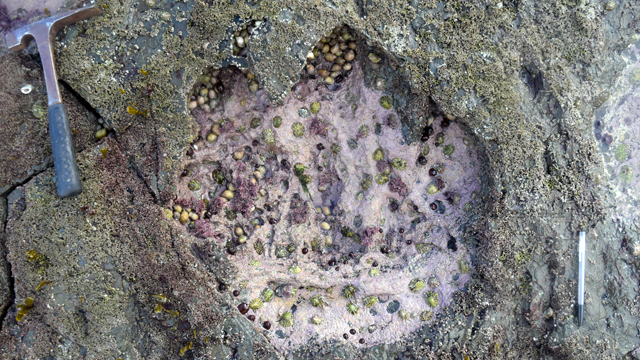 Sauropod dinosaur footprintPAIGE DEPOLOFootprints found in a lagoon on Scotland’s Isle of Skye may help paleontologists better understand a critical time in dinosaur evolution. Not much is known about the Middle Jurassic—a period between 174 million to 163 million years ago—because fossils from the era are relatively rare. But a recent discovery of 170-million-year-old sauropod and theropod tracks are offering some clues, researchers reported yesterday (April 2) in the Scottish Journal of Geology.

“This tracksite is the second discovery of sauropod footprints on Skye. It was found in rocks that were slightly older than those previously found at Duntulm on the island and demonstrates the presence of sauropods in this part of the world through a longer timescale than previously known,” study coauthor Paige dePolo of the University of Edinburgh in Scotland says in a statement. “This site is a useful building block for us to...

In the paper, the team suggests that Breviparopus, a genus of dinosaur inferred by its tracks only, left the sauropod footprints. Breviparopus may have been one of the largest dinosaurs to roam Earth, perhaps larger than Brontosaurus but researchers aren’t sure. The theropod tracks were probably left by Eubrontes, also an inferred genus known only by its tracks, and possibly a relative of the later Cretaceous-period Tyrannosaurus rex.

“These tracks were sort of hiding in plain sight for years,” University of Southern California paleontologist Michael Habib, who wasn't involved with the discovery, tells National Geographic. “It goes to show how sauropods are so much larger than everything else, that we field paleontologists are rarely looking for something of that scale at first.”

Study coauthor Davide Foffa of the University of Edinburgh first discovered the tracks in 2016. In 2017, dePolo and Steve Brusatte, also of the University of Edinburgh, returned to the site to map them. “The more we look on the Isle of Skye, the more dinosaur footprints we find,” Brusatte, a study coauthor, notes in the statement. “This new site records two different types of dinosaurs—long-necked cousins of Brontosaurus and sharp-toothed cousins of T. Rex—hanging around a shallow lagoon, back when Scotland was much warmer and dinosaurs were beginning their march to global dominance.”

Brusatte tells National Geographic that the Middle Jurassic was important because around that time “the first birds took to the sky, the first tyrannosaurs were evolving, [and] the first really colossal sauropods were getting their start.”

When dinosaurs trekked across what is now Skye, it was not long after the supercontinent Pangaea had begun to split apart. At the time, the land had rivers, lagoons, and beaches, and it was much closer to the equator. “This was a subtropical kind of paradise world, probably kind of like Florida or Spain today,” Brusatte tells The Guardian. “[These prints] were made in a shallow lagoon – dinosaurs walking in very shallow water.”

“We think of dinosaurs as thundering across the land, which of course they did, but in the Jurassic, dinosaurs had become dominant, they had spread all over the world, and they were living in all sorts of environments, even on the beaches, even in the lagoons,” Brusatte continues. “These dinosaurs look like they were just lingering, they were just kind of loitering. This seems to be a snapshot into a day in the life of some dinosaurs and I think that is just pretty cool.”