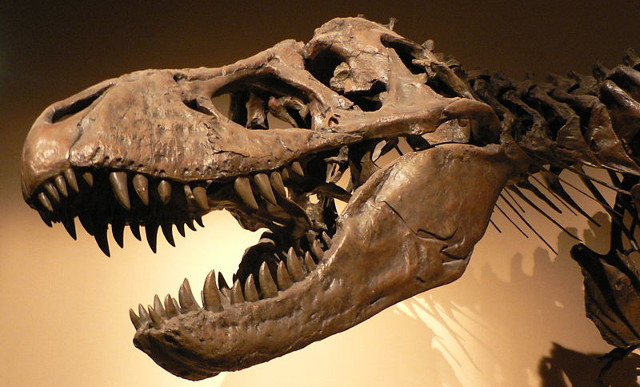 WIKIMEDIA, © 2005 DAVID MONNIAUXDinosaurs may have originated earlier than thought—just after a mass extinction some 250 million years ago—and they may be related to one another differently than scientists have long believed, according to a new analysis of 74 dinosaur species, including Tyrannosaurus rex. The study, published this week (March 22) in Nature, proposes an overhaul to the 130-year-old phylogenetic organization that lumped the meat-eating dinosaurs in with the long-necked plant-eaters, such as Brontosaurus.

“This paper does have the potential to make us rewrite textbooks and redesign museum exhibits,” paleontologist Thomas Holtz of the University of Maryland in College Park told Science. But, “before the American Museum of Natural History shifts all their dinosaur skeletons around, we have to remember this is just one paper.”

“We may be proved to be correct, we may not,” coauthor Matthew Baron, a paleontology graduate student at the...

Baron and colleagues collected data on more than 450 anatomical features from dinosaur fossils in museums around the world. They then ran the data through a computational analysis to determine the most likely fit between the species. Their analysis suggested that, some species from the group known as as lizard- or reptile-hipped Saurischia, which included carnivorous theropods such as T. rex as well as herbivorous sauropods such as Brontosaurus, be reclassified as a new group called Ornithoscelida (“bird-limbed”). Ornithoscelida would also include all species from a second major dinosaur group, the bird-hipped Ornithischia, which includes species such as Stegosaurus and Triceratops. Meanwhile, the Saurischia group would gain a new group of primitive carnivores called herrerasaurids.

The analysis also revealed that the earliest common ancestor of dinosaurs evolved between 247 million and 242 million years ago, and “was a quick, two-footed, generalist feeder that would have eaten a mix of plants and meat,” Baron told Reuters.

“It’s a radical proposal with a reasonable basis but no one expects it will be the last word,” Kevin Padian of the University of California, Berkeley, who was not involved in the analysis, told The New York Times.

Hans-Dieter Sues, a vertebrate paleontologist at the Smithsonian Institution’s National Museum of Natural History in Washington, DC, agreed. “I caution against totally reorganizing the dinosaur family tree just yet,” he told Nature. “For many regions of the world, there’s so much we don’t know about the fossil record.”