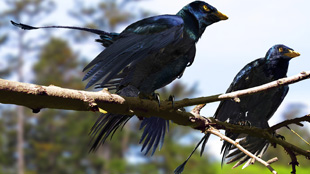 As one of the first feathered and winged dinosaurs to be described, the Microraptor is no stranger to headlines. Now, a nano-scale analysis of a well-preserved 130-million-year-old Microraptor fossil reveals clues about the feathers that once covered the crow-sized creature, which were likely black and iridescent. The discovery not only provides the earliest evidence of iridescent feathers (and the first example outside the avian family), but also offers clues about the function of feathers during their early evolution.

Researchers were able to infer the coloring of the Microraptor’s plumage by studying electron micrographs of melanin-packed structures called melanosomes that were preserved in the fossils, and comparing them with those of extant birds such as penguins, cockatoos, and ducks. They found that the arrangement and shapes of the melanosomes in Microraptor feathers were like those found in birds with...

“Our evidence that Microraptor was largely iridescent thus suggests that feathers were important for display even relatively early in their evolution.” Matthew Shawkey a biologist at the University of Akron in Ohio and one of the authors of the study, told The New York Times.

It also discredits the hypothesis that Microraptor was a nocturnal creature, since dark, glossy plumage is found only in birds active during the daytime.

The research was published yesterday (March 8) in Science.[gallery]