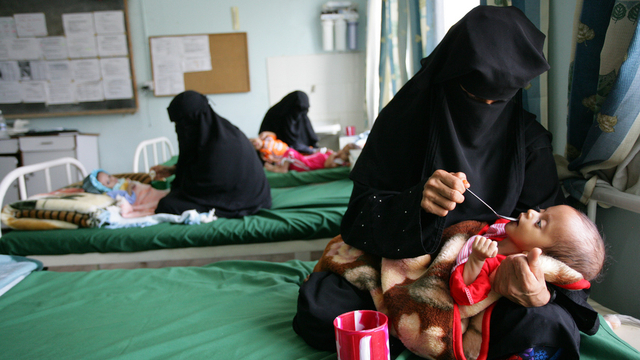 A mother spoon-feeds her child at a UNICEF-supported therapeutic feeding center in the city of Taiz, Yemen.ISTOCK, UNICEFYEMEN

International aid agencies published a joint statement on Tuesday (January 16), calling for the Yemeni port of Hudaydah to remain open past Friday, the end of a 30-day concession period to a blockade imposed by a Saudi-led military coalition.

The ongoing conflict between the coalition and Yemen’s Houthi rebels has resulted in the world’s worst humanitarian crisis, according to Reuters. More than 8 million people are completely dependent on international food aid and some 400,000 children suffer from severe acute malnutrition, which is potentially fatal.

“The lives of Yemenis, of whom more than 22 million are in need of humanitarian assistance, depend on keeping the ports open without interruptions or delays,” Jamie McGoldrick, the United Nations Development and Humanitarian Coordinator for Yemen, says in a statement.

Chaib added that Hudaydah is one of the worst-afflicted Yemeni governorates struck by the disease and that 19 percent of diphtheria cases are in children under five years old—an age group with an elevated risk of dying from the illness. The disease can be controlled with vaccinations and by administering antibiotics.