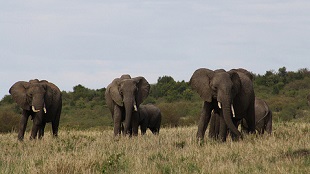 FLICKR, SHANKAR S.African elephants can distinguish human voices according to ethnic groups, and tell men’s voices from women’s or boys’ voices, according to a study published this week (March 10) in PNAS. Researchers from the University of Sussex, U.K., and their colleagues observed how elephants at the Amboseli National Park in Kenya reacted to humans with whom they shared geographic territory.

The researchers recorded men, women, and children from the nearby Maasai and Kamba tribes and played those recordings for elephants over two years. The elephants reacted defensively—retreating silently, bunching together and smelling the air—to recordings of Maasai men, with whom they sometimes had violent clashes. They reacted much less defensively to voices of Kamba men, with whom the elephants had far fewer altercations.

The elephants also did not react as strongly to the voices of Maasai women and boys, and could still discern Massai men’s voices, even...

“Basically they have developed this very rich knowledge of the humans that they share their habitat with,” coauthor Karen McComb the University of Sussex told Time. “Memory is key. They must build up that knowledge somehow.”

The elephants’ abilities are “pretty remarkable,” Joshua Plotnik, a behavioral ecologist at the nonprofit Think Elephants International who was not involved in the study, told USA Today. “Elephants are learning to adapt to a growing threat in their environment, and the unfortunate and disturbing part is that threat is us.”