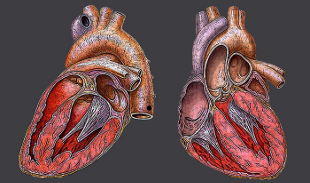 WIKIMEDIA, HEIKENWAELDER HUGOA rare, untreatable cardiac disorder called Barth syndrome that affects heart and skeletal muscle function is now available for study as an in-vitro chip. Developed from the skin cells of two Barth syndrome patients, the stem cell-based technology could serve as a platform for better understanding the disease and testing new therapeutics to treat it. The work was published yesterday (May 11) in Nature Medicine.

“You don’t really understand the meaning of a single cell’s genetic mutation until you build a huge chunk of organ and see how it functions or doesn’t function,” Kevin Kit Parker of the Wyss Institute at Harvard University, an expert in organs-on-chips technology, told the Harvard Gazette. “In the case of the cells grown out of patients with Barth syndrome, we saw much weaker contractions and irregular tissue assembly. Being able to model the disease from a single cell all...

The X-linked disease, which primarily affects boys, is the result of a mutation in the Tafazzin gene (TAZ). Parker and his colleagues dedifferentiated skin cells from Barth syndrome patients into induced pluripotent stem cells (iPSCs), then grew those cells on chips lined with human extracellular matrix proteins. The tissue that formed contracted very weakly, resembling the heart muscles of a patient with the disorder.

Using the same approach to develop an organ-on-a-chip from cells that had been edited to carry TAZ mutations had the same result, confirming the role of this gene in weak heart contractions, such as those observed in Barth syndrome. When the researchers provided wildtype copies of TAZ to the system, the contractile defect corrected itself. The team further delved into the mechanism by which mutated TAZ causes such problems and found that the cells’ mitochondria produced excess reactive oxygen species (ROS), which are normally released during cellular metabolism. Once again, lowering ROS production led to improved contractions.

“We showed that, at least in the laboratory, if you quench the excessive ROS production then you can restore contractile function,” William Pu of the Harvard Stem Cell Institute and Boston Children’s Hospital told the Gazette. “Now, whether that can be achieved in an animal model or a patient is a different story, but if that could be done, it would suggest a new therapeutic angle.”

The researchers are now following up to see if ROS therapy or gene-replacement therapy will prove effective in animal models of Barth syndrome, while using the new diseased-heart-on-a-chip technology to test currently approved and experimental drugs. “I feel that the technology that we’ve got ‘arms’ industry and university-based researchers with the tools they need to go after this disease,” Parker told the Gazette.