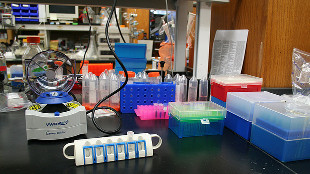 FLICKR, PLAXCO LABA Taiwanese biomedical researcher who co-authored a Nature paper while at Johns Hopkins University (JHU) may have killed himself last summer, on the day he was due to submit a written response to questions regarding the study's conclusions, reported The Washington Post.

The story centers on Daniel Yuan, formerly a statistician in the genetics lab of Jef Boeke at JHU Medical School, and Yu-yi Lin, then a researcher in the same lab. For years, Yuan had raised concerns about the methodology and results of the lab’s studies on interactions between genes in yeast. To him, the data didn’t always support the conclusions being drawn.

According to the Post, Yuan was first demoted and then dismissed in December 2011. By that time, Yuan already had serious concerns about data presented in a study that was eventually published in Nature in February 2012, and he later wrote...

In response, Nature’s editors had asked Boeke and lead author Lin, who had since moved on to take a new position at Taiwan National University, to submit a response to Yuan’s criticisms. But a day after Boeke wrote to Nature to ask for more time, Lin was found dead in his lab in Taiwan, surrounded by needles, sedatives, and muscle relaxants. Police ruled out suicide because there was no suicide note at the scene. Lin's family told the Taipei Times that he may have injected muscle relaxants due to work-related pressure.

Within hours of the news of Lin’s death, a note was sent from Lin’s e-mail address to the account of Yuan. “Yu-yi passed away this morning,” the e-mail read. “You must be very satisfied with your success.”

Although he was shocked by the whole affair, Yuan told the Post that he then asked Nature to publish his criticisms and inquired about Boeke’s response. On September 28, a Nature editor told Yuan that they were waiting on a proper response, but that “experiments are being done and probably a Correction written.” That correction has yet to appear, though a spokesperson for JHU told the Post that it was now under review by the journal. As a last resort, Yuan also contacted the Office of Research Integrity, who told him that the case is being investigated by JHU.

Correction (March 14): Yu-yi Lin's death was not reported as a suicide by local news outlets, as previously stated. Lin was found dead in his lab, surrounded by needles, sedatives, and muscle relaxants. Police ruled out suicide because there was no suicide note at the scene. The Scientist regrets the error.

Correction (March 15): The paper in question was not alleged to contain false or fabricated data, as previously stated. Instead, Daniel Yuan questioned the methods used to analyze the data and the conclusions subsequently drawn. The headline, subhed, and lede of the article have been changed to reflect this. The Scientist regrets the error.