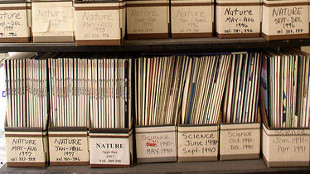 FLICKR, ROBERT CUDMOREResearchers are increasingly keen to use computer programs that scour the text of thousands of scientific papers, a method known as text-mining, but publishers tend to block such programs. The resulting disagreements are coming to a head, reported Nature, with the European Union set to rule on the legality of text-mining, and researchers and publishers discussing the terms by which the method can be used.

“Data- and text-mining techniques . . . could hold the key to the next medical breakthrough, if only we freed them from their current legal tangle,” Neelie Kroes, vice-president of the European Commission, told a Brussels intellectual-property summit last September, according to Nature.

Indeed, text-mining of the scientific literature has already proven useful. For example, Raul Rodriguez-Esteban, a computational biologist at drug company Boehringer Ingelheim in Connecticut, told Nature that he used the method to search roughly 23,000 articles to identify hundreds...

But it can take years to negotiate agreements with publishers to trawl their content, if permission is granted at all. Some publishers argue that programs downloading thousands of papers would strain their servers, and many fear it will lead to free distribution of their content.

The United Kingdom will later this year make text-mining for non-commercial purposes exempt from copyright, allowing scientists to mine any content they have paid for. The European Commission appears less amenable to such a measure, however. And in the United States, “fair use” rules may apply but the law is far from clear.

Meanwhile, CrossRef, a non-profit collaboration of publishers, is working on a system that will allow researchers to agree to text-mining terms and conditions by clicking a button on the publisher’s website. And the Copyright Clearance Center, which works with publishers on rights licensing, aims to collect the different publishers’ terms and conditions on one website to facilitate easy access for researchers and drug companies.