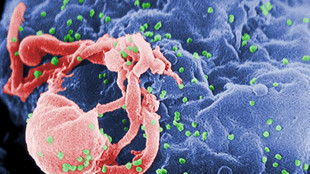 “The new work yields insight into the evolution of the relationship between hosts and viruses and, more importantly, presents us with a new and simple model system to study how viruses can hijack and utilize cellular machineries," Indiana University biochemist Stephen D. Bell said in a press release.

Both types of viruses hijack ESCRT to help them assemble themselves within the host cytoplasm and then to prepare to bud out of the cell membrane. The researchers demonstrated that STIV proteins and ESCRT proteins bound together and localized at sites of pyramid-shaped structures along the cells’ margins associated with viral emergence. They also showed that when the ESCRT system’s function was interrupted, the viral replication cycle ground to a halt.

"These parallels support the idea that the cellular ESCRT is ancient and that it is likely to have evolved prior to archaea and eukarya separating to become different domains of life," Bell said in the press release.