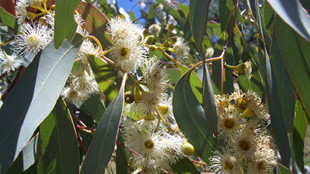 WIKIMEDIA, FIR0002Scientists have found a eucalyptus tree whose leaves on different branches taste different to predators, according to a study published today (February 20) in BMC Plant Biology.

The researchers sequenced the RNA molecules present in different leaves of a single tree, located in a small Australian town. The tree had been suspected to harbor substantial genetic variation since 1990, when scientists noticed that insects had entirely defoliated it with the exception of a single leaf-covered branch.

The branches, it turned out, were expressing different sets of genes that either made them attractive or unattractive to pests. The authors also found 10 instances where the leaves’ RNA sequences varied by a single nucleotide, likely the sites of mutations in the DNA. The paper showed that a few well-placed mutations can lead to substantial changes in gene expression.

Genetic variation among plant tissues is common in nature. For instance,...

In the case of the eucalyptus tree, having genetic differences between branches may protect it from being decimated, a BMC Plant Biology press release suggested. The good-tasting leaves satiate predators, while the tree still retains enough leaves to survive.