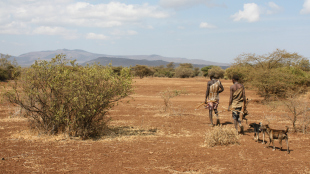 WIKIMEDIA, ANDREAS LEDERERThe Hadza of Tanzania are a tiny community of hunter-gatherers, some of the last vestiges of Paleolithic living. A new comparative analysis, published this week (April 15) in Nature Communications, reveals some notable differences between the gut microbiomes of Hadza and either rural farmers or urban dwellers, including a greater total number of microbial taxa in the Hadza, plus a notable lack of certain species in the guts of people from this group.

“The Hadza gut microbiome has an entirely unique combination of bacteria from any western population, or rural African population, that’s been sampled,” study coauthor Alyssa Crittenden, a nutritional anthropologist from the University of Nevada, Las Vegas, told Wired.

Stool samples from the hunter-gatherers lacked Bifidobacterium, a group of bacteria thought to be important for intestinal health. On the other hand, Treponema was abundant among healthy Hadza individuals, when in other populations, the...

Genetic diversity, rather than particular species, might be a more important criterion to determine the health of a microbiome, the authors proposed in a press release. “These findings illustrate a need to reevaluate the standards by which we consider [gut microbiota] ‘healthy’ or ‘unhealthy’, as they are clearly context dependent,” the authors wrote in their report.