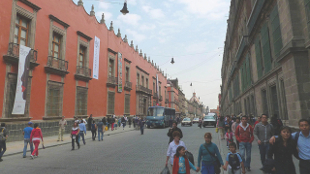 A street in Mexico CityFLICKR, TRISTAN HIGBEEMexico harbors a diversity of human genetic diversity, according to researchers publishing in Science last week (June 12). In some cases, in fact, the Mexican people studied showed as must genetic distance between them as individuals from different continents. At the same time, however, the work revealed that two distinct cultural groups in the country—indigenous Native Americans and “mestizos,” or people with mixed Native American and European ancestry—were remarkably similar at the DNA level.

“As academics, we have been separating them into two groups—indigenous and cosmopolitan,” geneticist Andrés Moreno-Estrada at Stanford University in California, one of two lead authors of the paper, told Nature News. “Genetically, we see that, in fact, there is very little difference between these two.”

Moreno-Estrada and colleagues came to the conclusions after examining 1 million genetic variants in the genomes of 31 people. Representatives of Mexico’s...

“This points to some pretty dramatic and long-standing processes of isolation, and suggests that sampling of additional native populations from Mexico, not to mention other countries in the Americas, could reveal an even richer panorama of variation,” geneticist Alexander Kim of Harvard Medical School told Nature.

The results could also have medical implications, coauthor Esteban González Burchard of the University of California, San Francisco, told National Geographic. “This study is about much more than Mexico. It’s putting the spotlight on one’s genetic ancestry, and that can be clinically relevant at a time when we’re moving down the field toward what I call precision medicine.”