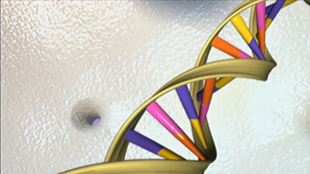 Researchers at Stanford University in California have programmed DNA to function as a rewritable biological data storage system. The research was published Monday (May 21) in the Proceedings of the National Academy of Sciences.

"One of the coolest places for computing is within biological systems," senior author Drew Endy told the BBC. His team spent three years designing the system, which consists of two enzymes that splice DNA sequences from a bacteriophage—a bacteria-infecting virus—into the E. coli genome. Once inserted, the DNA sequence points in one of two directions, like a '0' or a '1' in binary. Based on its orientation, the inserted gene expresss either a green or red fluorescent protein, causing the cell to glow green or red.

Past DNA-based storage systems, which relied on transcription factors to turn gene expression on or off, could only record information once, but these...

Synthetic biologists suggest that biological data-storage systems will someday have numerous applications in research, healthcare, and manufacturing, but for now, Endy isn’t worried about applications. "I'm not even really concerned with the ways genetic data storage might be useful down the road, only in creating scalable and reliable biological bits as soon as possible," Endy told the BBC. "Then we'll put them in the hands of other scientists to show the world how they might be used."