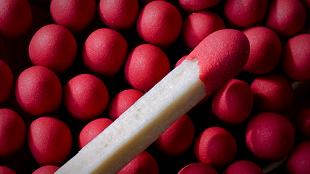 FLICKR, THE KNOWLES GALLERY, CHARLES KNOWLESItalian researchers have found a new use for DNA: as a flame retardant. Coating cotton cloth with DNA extracted from herring sperm, the scientists found that the genetic material reduced the fabric’s flammability, according to a paper published today (February 12) in the Journal of Materials Chemistry A.

“I was surprised, and then as I looked at the chemical structure of DNA, it started to become obvious why DNA works as a fire retardant,” Alexander Morgan, who studies fire science at the University of Dayton Research Institute in Ohio and was not involved in the study, told Wired Science.

When heated, DNA’s phosphate-rich backbone produces phosphoric acid, which helps replace water in cotton fibers with a flame-retarding residue. At the same time, the bases, which contain nitrogen, produce ammonia, which inhibits combustion and interacts with the residue to form a protective shield over...

“DNA can be considered as a natural flame retardant and suppressant,” Giulio Malucelli, an author of the paper and materials scientist at the Politecnico di Torino, Alessandria Branch, told Wired. “It could work also on other synthetic fabrics, or thin or thick plastic films.”

The new material could be an eco-friendly alternative to traditional flame retardants. But for now, Wired noted, DNA is three to five times more expensive than commercial flame retardants. Additionally, the coating used in the new study is not water resistant and so it would easily wash off.