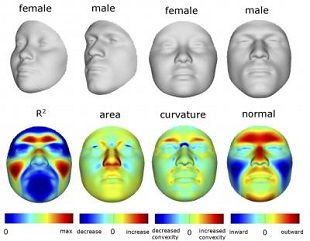 PENN STATE, MARK SHRIVER & PETER CLAESDNA left at a crime scene could one day tell investigators what the perpetrator looked like. Researchers reported last week (March 20) in PLOS Genetics that they can make rough 3-D facial sketches based on 24 variants of 20 genes.

A team led by Mark Shriver of Pennsylvania State University mapped 7,000 anatomical points on 3-D models of the faces of 592 people of mixed European and West African ancestry in three regions (United States, Brazil, and Cape Verde). The researchers noted variations in distance between points and then hunted for variants in the genomes of study participants, focusing on genes associated with embryonic head development and facial deformity. They used two dozen genes to create a computer program that converts gene sequence data into a simulated facial model.

Predicting facial structure based on genes is much more complex than predicting hair or...

Forensic use of the technology isn’t ready for prime time yet, but the researchers say it should be available in a matter of years. “I believe that in five to 10 years’ time, we will be able to computationally predict a face,” study coauthor Peter Claes of the University of Leuven told New Scientist.