Scientists are one step closer to creating molecular robots that may eventually perform complex tasks, such as building nanomolecules or delivering drugs to target tissues.

They have constructed DNA-based robots that can walk along a specific path unaided or collect various nanoparticles along an assembly line, according to two studies published this week in Nature. "This has the feel to me of the beginning of a technology revolution," said Andrew Ellington, an evolutionary engineer at the University of Texas at Austin and the vice president of the International Society for Nanoscale Science, Computation and Engineering, who was not involved in the research. "This work will absolutely pave the way for how you build molecular robots."

The robots built in one study are a type...

The spider is fueled by the chemical interactions its single-stranded DNA "legs" have with the origami surface. In order to take a "step," the legs first cleave a DNA strand on the surface, weakening its interaction with that part of the origami surface. This encourages the spider to move forward, pulled towards the intact surface, where its interactions are stronger. When the spider binds to a part of the surface that it is unable to cleave, it stops. In essence, the researchers created a DNA spider that can "sense the environment," Stojanovic said -- "molecules that respond [to environmental] cues and behave [in] certain programmable ways on their own." The next step, he added, is to increase the complexity of movements performed by such autonomous robots by compiling "a collection of rules [of] interactions between molecules and between molecules and environment."

A fluorescence video microscopy-generated animation of a DNA spider moving along the designated path from the green-labeled start site towards the red-labeled goal. Each colored dot represents its position at a given time over the 40-minute observation period (see legend).
Credit: Nils Walter, Anthony Manzo, Nicole Michelotti and Alexander Johnson-Buck, University of Michigan

Meanwhile, Nadrian Seeman of New York University and his colleagues have designed another type of DNA walker that can collect nano-sized "cargo" as it moves. Unlike the autonomous spider, the cargo-collecting walker is controlled by single strands of DNA added by the researchers to direct the robot. These strands instruct the robot to move past an "assembly line" of three small loading devices, also made out of DNA, each containing a gold nanoparticle. Each loading device can be programmed to either donate its cargo to the passing walker, or keep it, such that the walker can receive anywhere from zero to three particles along its short (less than 200 nanometers) journey. It's "like an automobile assembly line," Seeman said. "We have the option to either add or not add various components to [the walker] depending on how the devices are programmed."

One possibility for future experiments will be to combine the advances of each of the two papers into one complex, autonomous DNA robot, said Lloyd Smith of the University of Wisconsin, who wrote an accompanying review in Nature. "It's going to take more work to take it to that next level, [but] bringing those two things together is going to be the next step towards" a fully autonomous, functional nano-sized robot. Another future direction, the researchers agree, would be to scale up the length of the pathways and the complexity of the behaviors. But even once greater levels of complexity are achieved, what can actually be done with the little robots is still up for debate. "This whole field," which is still in its early stages, Smith said, "hasn't really found the application yet."

DNA robots have thus far proven to be capable of fairly sophisticated manipulation at the nanoscale, but the practical uses of this novel technology are still a little unclear. One popular idea is to use cargo-collecting robots to construct nanomolecules that would be difficult to make using traditional methods, because of the control they offer researchers at such a tiny scale. "The ability to hold a molecule in a particular position and hold another molecule in a defined position could open up possibilities in organic synthesis," said Smith.

Another possibility is their use in drug delivery, said biochemist William Shih of Harvard University, who did not participate in the studies. "Having a very smart robotic delivery system could do a lot better job of killing the disease tissue and do far less damage to our otherwise healthy tissue," he explained. But most agree that these potential applications are yet to be realized; the current work merely shows "proof of principle" that such complex behavior might one day be achieved using this technology, Seeman said. 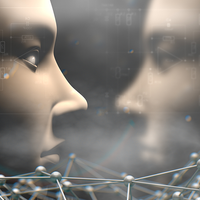