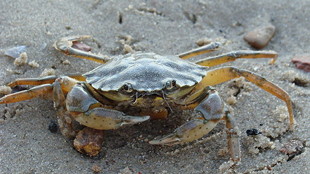 WIKIMEDIA, ARTHROHumans frequently boil or dismember crustaceans while the animals are still alive, assuming they feel no pain. But a Queen’s University Belfast professor of animal behavior argued in a talk he gave this week (August 7) that the arthropods do experience pain, Nature reported.

The speaker, Robert Elwood, based his assertions on a series of experiments in which crabs were subjected to electric shocks. Many have argued that crustaceans do not feel pain, claiming the animals’ responses to stimuli like electric shocks are merely automatic.

In one set of experiments, Elwood and a colleague allowed shore crabs to choose to enter one of two shelters. One shelter delivered electric shocks to the animals, while the other did not. The crabs appeared to learn to avoid the chambers where shocks had been delivered.

In a second set of experiments, the researchers subjected hermit crabs to shocks within...

Elwood argued that these “aversive behaviors” are a sign that crustaceans do experience pain and seek to avoid it.

“Assessing pain is difficult, even within humans,” Elwood said at the meeting, according to Nature. But he added that there was a “clear, long-term motivational change [in these experiments] that is entirely consistent with the idea of pain.”