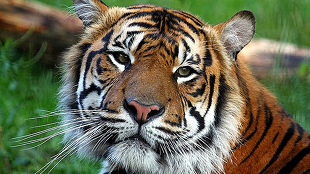 FLICKR, BRIAN MCKAYThe canine distemper virus may be infecting the Sumatran tiger, a critically endangered species living in Indonesia, according to BBC News. The virus, which devastated lions in the Serengeti in the 1990s, has become a major threat to wildlife.

“If you wind the clock back about 30 or 40 years, it was a dog disease—it was a canine virus and only affected dogs," John Lewis, director of Wildlife Vets International, told the BBC. "But in the intervening years, the virus has evolved and has changed its pattern of animals it can infect to include marine mammals (such as seals) and big cats."

Researchers believe that dogs must serve as a reservoir for the virus, and that big cats come into contact with the virus through contact with domestic dogs that have not been inoculated against it.

The virus has previously killed Siberian tigers in Russia....

When Lewis visited Sumatra recently, he talked to local veterinarians who had heard reports of tigers coming into villages and behaving oddly, the BBC said. Lewis considers this a worrisome sign. When he returns to Indonesia in September he’ll start a program to track distemper in Sumatran tiger populations, an effort he hopes will serve as a model for surveillance programs in other tigers subspecies’ ranges.

“A tiger disease surveillance programme has never been tackled,” Lewis said in a Wildlife Vets International statement. “If we get it right, it could help us forestall a major problem, which is the last thing tigers need in their precarious state.”