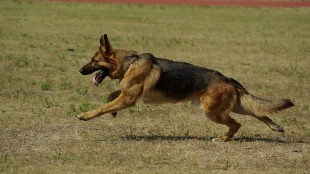 PIXABAY, POHJAKROONAn international group of researchers analyzed a series of dog and wolf genomes and concluded that the domesticated canines diverged from a population of wolves in Southeast Asia 33,000 years ago. The results were published this week (December 15) in Cell Research.

“We find that dogs from southern East Asia have the same DNA types that are found in dogs all over the world, but also unique types that we don't see anywhere else,” study coauthor Peter Savolainen, an evolutionary geneticist...

When the researchers examined the migration history of domesticated dogs, they found that the canines moved out of Southeast Asia about 15,000 years ago, toward Africa and the Middle East. Europe saw its first dogs about 10,000 years ago. A canine population may then have traveled back to northern China and bred with local dogs before coming to the Americas.

“For some reason, dogs stayed around East Asia for a long time before their migration out of Asia,” study coauthor Ya-Ping Zhang of the Chinese Academy of Sciences Kunming Institute of Zoology told Discovery News. “We speculated that the glacial period might have been the environmental factor that prevented dogs from migrating out of Asia.”

The results contradict other recent reports naming Central Asia as the origin of domesticated dogs. Adam Boyko of Cornell University, a coauthor on the Central Asian study, told The Christian Science Monitor that the conflict lies in the data. Each team claims the other did not sample enough dogs from their own highlighted regions. “As geneticists, we love to get new data sets like this to play with,” he said. “Maybe at some point we’ll all be on the same page.”