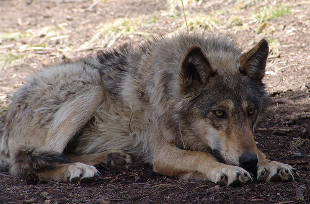 FLICKR, DREW AVERYUniversity of Chicago geneticist John Novembre and an international team of researchers decided to sequence and compare the full genomes of three gray wolves from three diverse locations—China, Croatia, and Israel—with an African basenji, an Australian dingo, and a Boxer to see which lineage or lineages had given rise to domestic dogs. But instead, the results suggested that rather than evolving directly from any of these wolf species, modern dogs split from an ancestral species that also gave rise to modern wolves, though no longer exists.

The study, published yesterday (January 16) in PLOS Genetics, comes hot on the heels of November 2013 Science paper that analyzed mitochondrial DNA from 18 fossil canine species, 49 modern wolves, and 77 modern dogs and came to a very similar conclusion: modern dogs evolved from a wolf species that is now extinct.

The new analysis found that of the...

The results also suggested that early dog populations experienced significant downsizing, as did ancient populations of gray wolves after the wolf-dog split, hinting that both groups saw a reduction in genetic diversity. However, there was evidence of considerable interbreeding between these early populations. Finally, like the November Science study, the analysis points to a domestication date of between likely interval being between 9,000 and 34,000 years ago, before the advent of human agriculture.

The relative timing of dog domestication is interesting in the light of other recent dog genetics research that found evidence that dogs have accumulated genes to help breakdown starch, possibly allowing them to scavenge from human trash heaps. In the new study, the authors were able to confirm that such genetic changes most likely arose in dogs after their split from wolves.

“You had domestication occurring in the context of dogs hanging around human hunter-gatherer groups, and only later, when these groups began to switch to farming, did they change their diets,” Novembre told HuffPost Science.