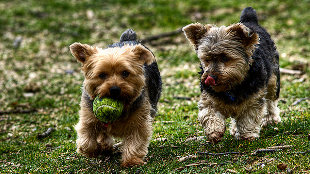 FLICKR, BALA SIVAKUMARWhen people give their attention to a stranger dog—albeit a stuffed, animated one, in the case of this study—their pets don’t like it, according to research published yesterday (July 24) in PLOS ONE. The three dozen dogs of the study tended to growl more and some even snapped or inserted themselves between their owner and the toy dog, behaviors that may represent a form of jealousy in our canine friends, the researchers said. In contrast, the dogs did not react violently when their owners ignored them to read a children’s book aloud; a bucket with a face painted on it appeared to get an intermediate reaction from the study subjects, The Guardian reported.

“Our study suggests not only that dogs do engage in what appear to be jealous behaviors but also that they were seeking to break up the connection between the owner and a seeming...

The study, which included diverse small dog breeds such as chihuahuas, Yorkshire terriers, and several mutts, was inspired by research showing that 6-month-old babies displayed jealousy when their mothers ignored them in favor of a life-like doll. Just like the dogs, however, the babies did not seem to be jealous when their mothers read a book.

“It is an interesting study that provides some empirical support to the idea, quite widespread among dog owners, that these animals possess some sort of equivalent of jealousy behavior,” Giorgio Vallortigara, a neuroscientist at the University of Trento, told The Guardian.