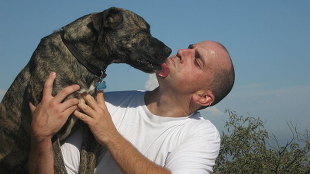 WIKIMEDIA, JAMIE LANTZYSeveral groups of genes in humans and dogs appear to have evolved in parallel, most likely as a result of living in the same environment since we first domesticated our canine companions, according to a study published this week (May 15) in Nature Communications.

An international team of researchers sequenced the whole genomes of four grey wolves, three indigenous Chinese street dogs, and three domesticated breeds—a German shepherd, a Belgian malinois, and a Tibetan mastiff. The team’s analyses of these genomes put the split between wolves and dogs at around 32,000 years ago—much earlier than previous estimates of when domestication began. The results also suggest that domestication may have started in Asia, rather than the Middle East as other studies have indicated.

The researchers then identified a list of genes—including those involved in digestion, metabolism, cancer, and the transmission of serotonin in the brain—that are under...

“As domestication is often associated with large increases in population density and crowded living conditions, these ‘unfavorable’ environments might be the selective pressure that drove the rewiring of both species,” the study authors wrote. For example, “positive selection in neurological pathways, in particular the serotonin system, could be associated with the constant need for reduced aggression stemming from the crowded living environment.”

Bob Wayne, an evolutionary biologist at the University of California Los Angeles, told National Geographic that further comparisons between humans and other animals, such as horses or goats, would be useful to see if parallel evolution between humans and their domesticated companions is common. He also pointed out that evaluation of canine sequences from other parts of the world is needed to verify the date and location of canine domestication.