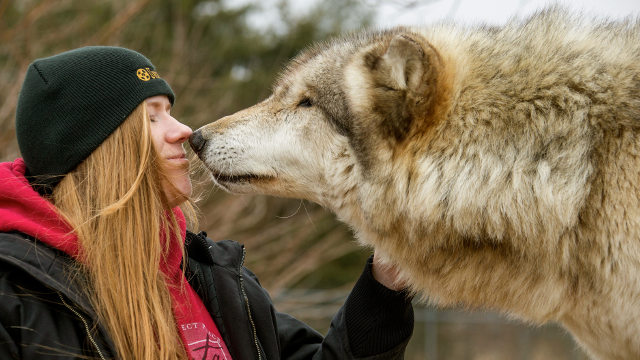 A socialized wolf briefly greeting an unfamiliar experimenter.IMAGE: MONTY SLOANThe key to dogs’ transformation from wild wolves into faithful canine companions may reside in a handful of genes, according to a new study. The authors of the paper, published yesterday (July 19) in Science Advances, suggest that a couple genes in the same region of a single chromosome might have played a role in the extreme sociability that likely attended the domestication of wolves tens of thousands of years ago.

These genes, GTF2I and GTF2IRD1, also play a role in a human disease, Williams-Beuren syndrome, marked by hyper sociability.

“It is great to see initial genetic evidence supporting the self-domestication hypothesis or ‘survival of the friendliest,’” Duke University evolutionary anthropologist Brian Hare, who was not involved in the study, tells Science News. “This is another piece of the puzzle suggesting that humans did not create dogs...

Princeton University evolutionary biologist Bridgett vonHoldt and her coauthors studied the behavior of 16 dogs and eight socialized, captive grey wolves, finding that when faced with a cognitively challenging task, dogs spent more time looking at and interacting with humans in the room than did wolves. This, they say, indicates that the dogs were more social. When they peered into the genomes of those canids, as well as genes from other dog breeds registered with the American Kennel Club, the researchers found variations in GTF2I and GTF2IRD1.

“Our finding of genetic variation in both dogs and wolves provides a possible insight into animal personality, and may even suggest similar genes may have roles in other domestic species (maybe cats even),” vonHoldt tells BBC News.

In addition to resolving a facet of dog domestication and personality, the research is a tantalizing and elusive glance at the genetics of behavior. “We struggle a lot with wanting to know genes that are linked to behavior,” vonHoldt tells The New York Times.

Previously, researchers had suggested other genes were linked with sociability in dogs, and those genes also play roles in human behavioral disorders, such as autism and schizophrenia.