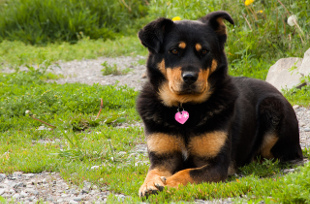 Genetic studies have previously indicated that dogs were first domesticated in China, but the fossil record points to possible origins in Europe and Siberia. Researchers from Cornell University in Ithaca, New York, and their colleagues shed new light on the evolution of man’s best friend in a paper published Monday (October 19) in PNAS, suggesting that the domestic dog first emerged near present-day Nepal and Mongolia.

The international team genotyped 5,392 dogs using blood stored in the Cornell Veterinary Biobank. The samples included blood from 549 “village dogs” from 38 countries, which are not descended from the purebred or mixed-breed populations created in Europe, but instead come from rural areas around the world where they have been allowed to breed naturally. As a result, these dogs are more genetically diverse and have older lineages than the purebreds, making them “a better reflection of the genetic...

Comparing the autosomes, Y chromosomes, and mitochondrial DNA in the dataset, the researchers concluded that domestic dogs originated in Central Asia, then expanded to East Asia and beyond. “We looked exclusively to see if there was evidence of multiple domestication events. And like every other group that’s looked for that, we found no evidence of it,” study coauthor Adam Boyko of Cornell told BBC News.

The team also noted details regarding other canine populations; dogs in the Neotropics and South Pacific were descended from later European stocks, but many Asian populations had little evidence of European interbreeding.

The latest results don’t yet close the case on dog evolution, but provide another point of evidence for an Asian origin. “I’m convinced the only way to shed further light on the topic is by analyzing ancient remains,” Olaf Thalmann, a geneticist at Uppsala University in Sweden who was not involved with the study, told New Scientist.