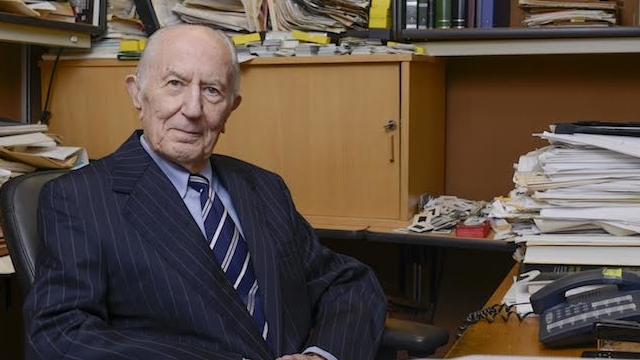 Donald Seldin, chairman emeritus of Internal Medicine at the University of Texas Southwestern Medical Center, died of lymphoma on Wednesday (April 25). In his 67-year career at the university, he oversaw the school’s transformation from a small facility to one of the leading medical centers in the country. Seldin was 97.

“It is important to recognize the magnitude of Dr. Seldin’s many professional achievements,” UT Southwestern President Daniel Podolsky says in a statement. “In his 36 years as Chairman of Internal Medicine at UT Southwestern, he held a singular view of what an academic department should be and built a world-class department around that vision—which has been emulated across the country.”

A native of New York, Seldin was recruited to UT Southwestern in 1951 from Yale, where he had been a faculty member. When he arrived, the medical center was housed in former...

In 1966, Seldin’s former student Joseph Goldstein joined the faculty at UT Southwestern. Goldstein and fellow faculty member Michael Brown, who Seldin and Goldstein recruited to UT Southwestern, won the 1985 Nobel Prize in Physiology or Medicine for their study of cholesterol metabolism and discovery of low-density lipoprotein receptors. UT Southwestern faculty have won several more Nobel Prizes since then.

“Just the way a sculptor molds a figure out of clay, so Dr. Seldin has molded Joe and me, and many others,” Brown, the Director of the Erik Jonsson Center for Research in Molecular Genetics and Human Disease at UT Southwestern, says in the statement. “Dr. Seldin created a vision of medicine that was based on science and he brought it to fruition.”

In addition to his work at UT Southwestern, Seldin cofounded the American Society of Nephrology, served on the board of the RAND Corporation, a global think tank, and was elected president of seven academic societies around the world. In 1947, while serving in the US Army, Seldin testified as an expert witness at the trial of a Nazi doctor who had experimented on human subjects, according to The Washington Post. Seldin also served as the only medical doctor on the committee of the National Commission for the Protection of Human Subjects of Biomedical and Behavioral Research, which drafted the Belmont Report that established ethical guidelines for medical studies.

Medical practitioners, Seldin told D Magazine in 2013, “are inheritors of the activities of people who have preceded us and who have devoted themselves to the mitigation of suffering.”