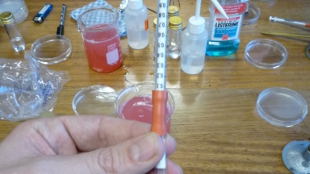 FLICKR, DULLHUNKAmateur biologists working in community do-it-yourself (DIY) laboratories—or even their own garages—are unlikely to pose a serious threat to society, according to a report released today (November 19) by the Synthetic Biology Project at the Woodrow Wilson International Center for Scholars in Washington, DC.

“There’s been a lot of debate in the biosecurity community about what DIYers may or may not be doing, from making narcotics to pandemics to viruses that kill heads of state (I’m not joking),” Wilson fellow Daniel Grushkin, a coauthor of the new report, wrote in an e-mail to ScienceInsider. Indeed, many have debated the need for greater oversight of such DIY efforts. But the Synthetic Biology Project’s survey of the DIYbio community suggests that such fears are unfounded, and Grushkin hopes researchers will start to focus on the opportunities that the DIY community represents, including improving science education and awareness, and perhaps...

“[Some] believe DIYbio can inspire a generation of bioengineers to discover new medicines, customize crops to feed the world’s exploding population, harness microbes to sequester carbon, solve the energy crisis, or even grow our next building materials,” Grushkin and his coauthors wrote in the report. “Many Do-It-Yourself participants—or DIYers—believe that wider access to the tools of biotechnology, particularly those related to the reading and writing of DNA, has the potential to spur global innovation and promote biology education and literacy.”

At the same time, the report cautions against believing the unproven hype often touted in some media reports. “The reality, as it stands, is that DIYbio is far more innocuous than either vision”—fear concerning such amateur-driven research or blind faith in its potential.

According to the online survey, which received 359 responses from the DIY community, the vast majority of DIYers work in community labs, with less than 10 percent of respondents reporting doing work on their own at home. Moreover, while some reported fairly sophisticated projects, such as manufacturing PCR machines for a fraction of the retail cost, most amateur biologists reported doing harmless, basic experiments, such as DNA extraction from a cheek swab.

The report also revealed that many DIYers are open to more formalized regulation of their work. While just 25 percent said they think such oversight is needed at the moment, about half of respondents noted it would likely become necessary in the future.