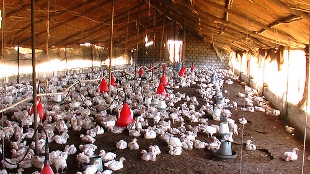 FLICKR, KASHIF MARDANIThe H7N9 strain of bird flu circulating in China appears to have easily developed resistance to antiviral drug treatment, according to the authors of a new study published today (May 29) in The Lancet. Three out of 14 patients treated with antiviral drugs such as Tamiflu, which had helped control infection in other flu patients, became resistant to the treatment and failed to respond.

The 14 patients studied all developed pneumonia and many required ventilators to help them breathe. Antiviral drugs such as Tamiflu were administered, and in most patients, the drugs helped reduce viral load, leading to better outcomes. However, three patients did not respond to the treatments, and two of them died. A genetic analysis of isolates from these patients showed that the virus had developed mutations that allowed it to escape the drug’s mechanism of action.

One of the three patients appeared to...

The H7N9 strain has been confirmed in 131 people and has caused 36 deaths since it was first reported, according to BBC News. “The apparent ease with which antiviral resistance emerges in H7N9 viruses is concerning; it needs to be closely monitored and considered in future pandemic response plans,” the authors of The Lancet article wrote.

Another paper published in the May issue of Antiviral Research shows that resistance to antiviral treatment for flu may be higher than originally expected. The study shows that 62 percent of human H5N1 viruses and 32 percent of avian viruses are resistant to antiviral medications, which are also no longer effective in treating seasonal flu.