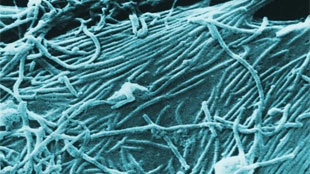 Scanning electron microscope images of Ebola virionsWIKIMEDIA, PLOS BIOLOGYLabs that handle dangerous biological agents like anthrax, SARS, and Ebola accidentally released pathogens 639 times between 2004 and 2010, but reported no thefts and few cases of lab workers being infected, according to statistics released by the Centers for Disease Control and Prevention (CDC). The report, published in the latest issue of Applied Biosafety, comes more than 10 years after a series of anthrax attacks carried out by a government biodefense researcher in 2001, which prompted tighter regulations on research using infectious agents.

Over the 7-year period studied, labs also reported 11 lab-acquired infections—10 bacterial and one fungal. None of the infections proved fatal, and none made the leap to other people. The authors suggest that lab workers were infected by the release of aerosols containing the agents, often created when a sample plate is opened or stirred....

According to the CDC, the infection rate of 1.6 per year was far lower than the rate of general occupational illnesses in science labs. “If you look at the report as a whole, it's a success story,” co-author Robbin Weyant, told the Associated Press. “We have about 10,000 people a year working in these laboratories. To have such a small number of confirmed infections over nearly a decade, I think, is quite good.”