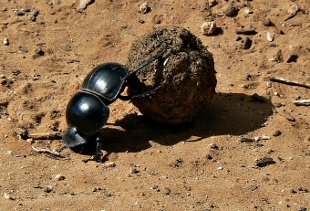 Flightless dung beetle (Circellium bachuss)WIKIMEDIA, KAY-AFRICADung beetles (Scarabaeus lamarcki) scurry around cow pastures collecting little balls of poop from steaming heaps of excrement and quickly roll those balls to their nests, where they bury them for a future meal. (See a video of this behavior.) According to new research published in Philosophical Transactions of the Royal Society B, the beetles’ navigational efficiency is due, in part, to the sun.

Last year, Marie Dacke, a biologist at Lund University in Sweden, and her colleagues showed that dung beetles can navigate using the Milky Way—a study that won the researchers an Ig Nobel Prize last fall—but how the insects found their way during the day remained a mystery. To find out, Dacke’s team traveled to South Africa to watch the insects in action. By observing the beetles at different times of day, and by manipulating their sun exposure with wooden boards and mirrors, the researchers found that the hard-working animals were indeed dependent on the Earth’s star for navigation. When the sun was directly overhead or blocked by a board, the beetles made many navigational errors; when the sun was near the horizon, they fared much better.

The beetles seemed to also rely on cues aside from sunlight, however, as their navigation wasn’t completely impaired when the sun was blocked or in a less-informative position in the sky. “It’s as if the beetles knew the sun wasn’t always reliable,” Dacke told National Geographic.