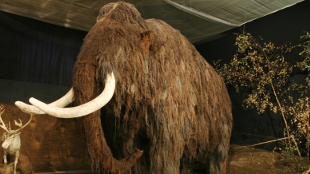 A mammoth that stood only 1 meter tall and weighed in at 300 kilograms used to call the small Mediterranean Island of Crete home, according to scientists at London's Natural History Museum. Researchers had previously unearthed what they thought were fossil elephant teeth on Crete, but the discoveries last year of another molar—with structural characteristics of mammoths—and a small humerous on the island suggested a mammoth species that appeared to be struck by island dwarfism, where island-bound species evolve to have smaller stature. "This creature would look like a baby Asian elephant, only chunkier and with curvy tusks," Victoria Herridge, paleontologist and first author of the Proceedings of the Royal Society B paper reporting the findings, told Nature.

Herridge and her coauthor Adrian Lister dubbed the tiny mammoth Mammuthus creticus. The new species joins a list of other dwarf mammoth species that researchers have suggested once inhabited Wrangel Island in the Arctic and the Channel Islands off the California coast.