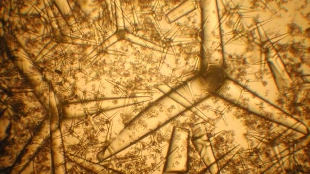 Microscopic structures called spicules make up the bodies of sponges, filter feeders that could have helped oxygenate the world's oceans.WIKIMEDIA, NOAAAnimal species may have played a bigger role in the oxygenation of the deep ocean—which was necessary for life to really take off and get evolution rolling on Earth—than  previously realized, according to researchers in the United Kingdom. Publishing in Nature Geoscience, the University of Exeter’s Timothy Lenton, who led a team of scientists from the University of Leeds, the University of Cambridge, and University College London, proposed that early eukaryotes, increasing in size as evolution proceeded, sank quickly and therefore reduced oxygen consumption in surface waters. In addition, filter feeding animal species, such as sponges, helped spread oxygen from the ocean’s surface to its depths by filtering out organic matter thus helping to reduce oxygen demand in surrounding waters. “There had been enough oxygen in ocean...

During the Neoproterozoic Era (from 1 billion to 542 million years ago), more oxygenated ocean depths also could have slowed the release of phosphorus from sediments, lowering productivity and therefore ocean-wide oxygen demand, the team suggested. This would have set up a positive feedback loop further oxygenating the deep ocean. Well-oxygenated depths provided just the right stew for life to burst forth and evolve more complex, more mobile animal species. This model runs contrary to the traditional view that it was increases in atmospheric oxygen that preceded the evolution of complex animal forms.

“The effects we predict suggest that the first animals, far from being a passive response to rising atmospheric oxygen, were the active agents that oxygenated the ocean around 600 million years ago,” Lenton said in a statement. “They created a world in which more complex animals could evolve, including our very distant ancestors.”